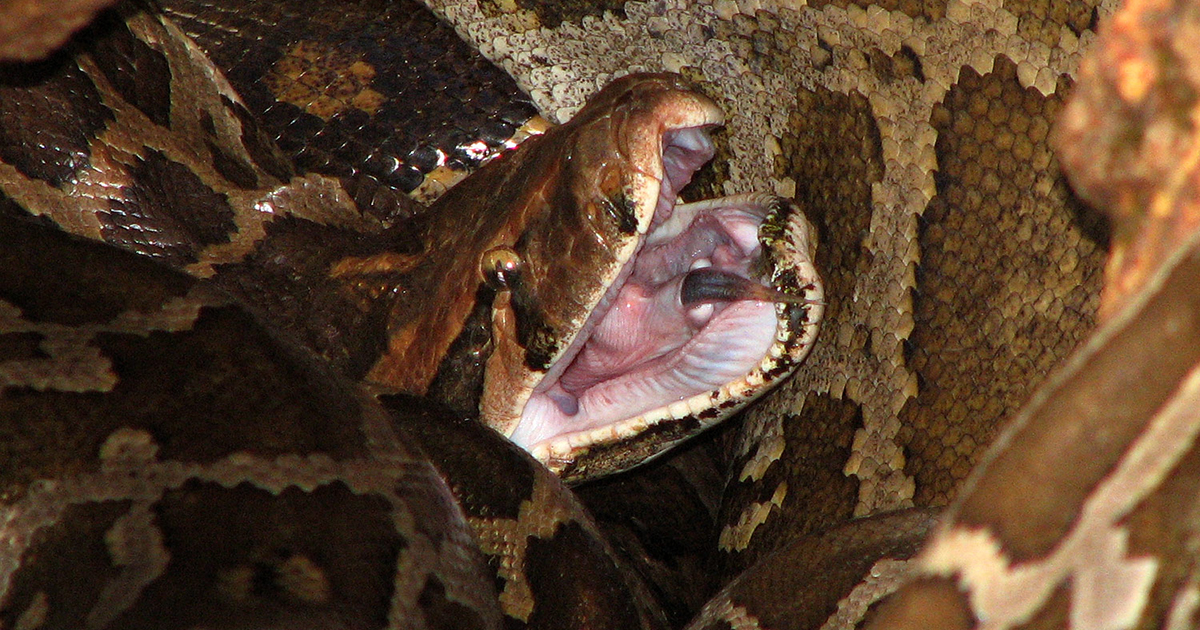 When it comes to invasive species, Burmese pythons are the stuff of nightmares, weighing upwards of 200 pounds and stretching up to 18 feet. They kill by coiling their bodies around prey and squeezing it to death, and then they start swallowing. These insatiable eaters can devour a wide variety of animals, including large mammals like white-tailed deer. And they begin downing meals sometimes even before their victims have stopped breathing.

But how much can Burmese pythons ultimately gobble? That’s a question a group of researchers at the University of Cincinnati recently decided to explore. Their findings add another layer of horror to the Burmese python’s modus operandi. Here’s everything you need to know about one of the world’s most gluttonous predators.

How do you measure the swallowing capacity of a Burmese python? That’s a question that biologists at the University of Cincinnati decided to explore with shocking conclusions. They recently published their findings in the journal of Integrative Organismal Biology, explaining how Burmese pythons manage to bite off far more than they can chew.

To get to the bottom of the jaw-gape conundrum, they got their hands on the most enormous, euthanized pythons in the state of Florida, and then they started stuffing them — literally. The secret behind the snake’s brutal survival mechanism lies in the construction of its jaws and entire bodies. And contrary to popular belief, it’s not simply a matter of dislocating their lower jaw.

Instead, Burmese pythons practice the equivalent of reptilian yoga. You see, snakes’ lower jaws are connected to their craniums via elastic pieces of connective tissue. These tissues stretch to incredible widths in some cases, permitting snakes to swallow super-sized prey.

Stretched to the Limit

Bruce Jayne, the lead author of the study, explains, “The key thing about snakes is that they don’t dislocate any joints during the process of swallowing their prey. But the joints they do have between their bones are extremely mobile. Unlike [human] jaws, which are one piece, in snakes, it’s two pieces. And in between those two pieces are connective tissues, skin, and muscles.”

In essence, the Burmese python’s entire body is a highly flexible and mobile structure designed for maximum swallowing power. The more flexible the connective tissue, the more an individual reptile can down. That said, this “superpower” comes with a severe downside. When snakes gobble more than they can handle, it can kill them.

Nevertheless, caution is thrown to the wind when big animals cross the snakes’ paths, showing off their ability to stretch gaping jaws to unbelievable widths. Of course, studying this capacity was no simple task. You could say it stretched the biologists’ research abilities, too.

Engulfing Prey an Inch at a Time

Bruce Jayne and his crew employed 3D-printed probes in various sizes to measure individual pythons’ mouth sizes. These probes varied in size from small to larger than the diameter of a five-gallon plastic bucket. 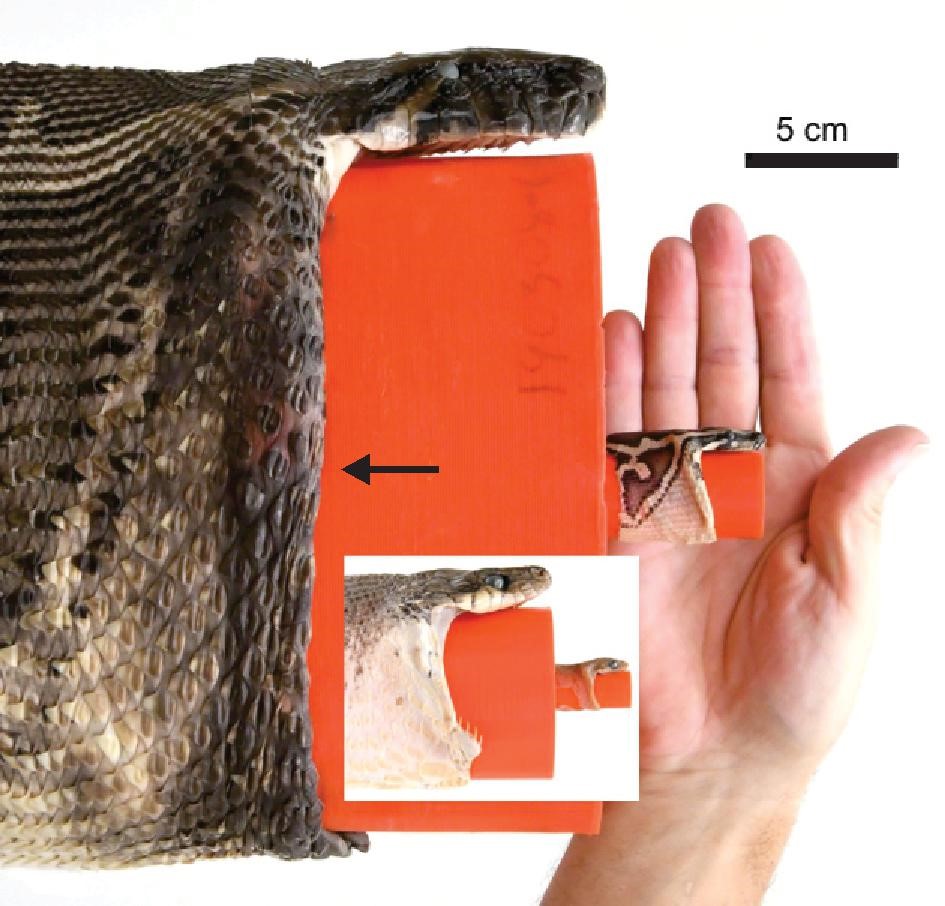 Of the euthanized snakes they compiled for the study, only one could stretch its mouth to engulf the probe roughly the size of the bucket measuring about 9 inches in diameter. For context, you could put your head inside it. In life, this specimen weighed roughly 130 pounds and came in at 14 feet long — a truly sobering thought for Floridians living with these critters’ presence in their state.

While you might think this is a real monster bite, Jayne believes this is only the beginning regarding the capabilities of Burmese pythons. After all, their research was limited to snakes euthanized as a part of Florida’s invasive species program. But Jayne has a sneaking suspicion much bigger serpents are still out there, swallowing truly gargantuan prey.