Snoopy First Appeared in a Ripley’s Believe It or Not! Cartoon 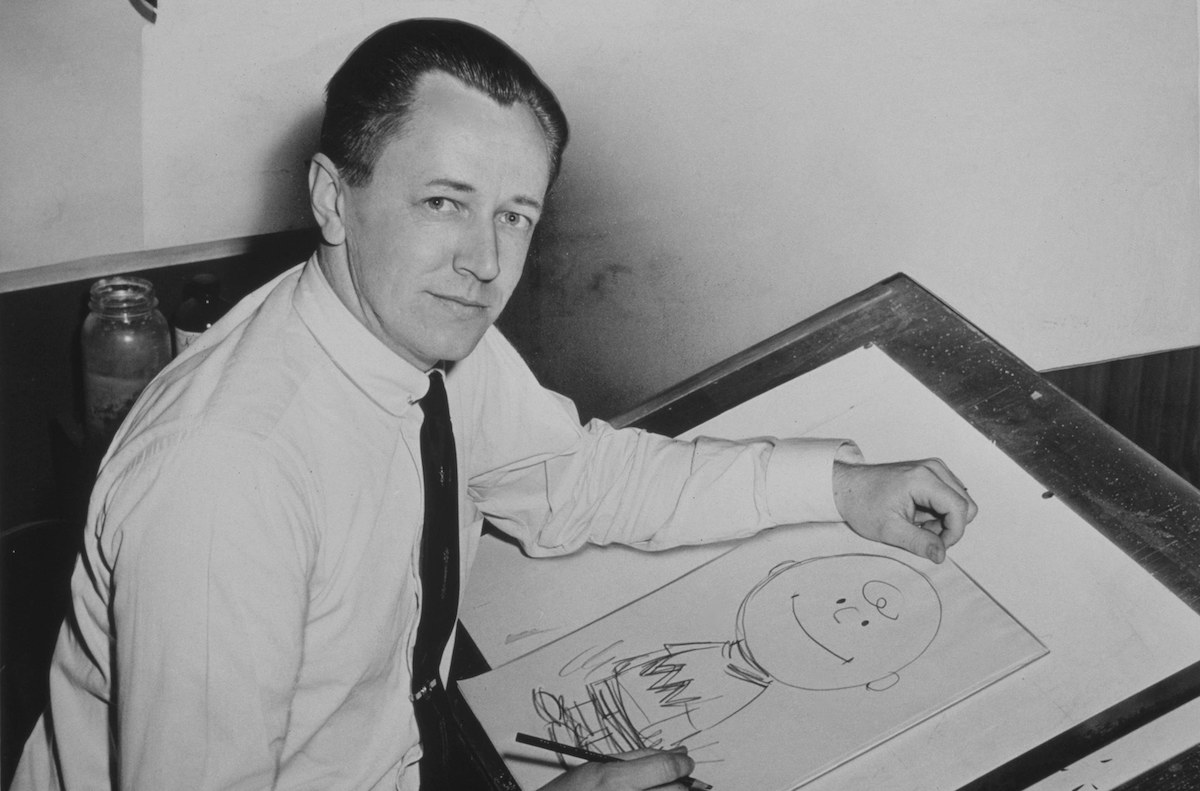 Believe It or Not!, Snoopy, the famous Peanuts character, made his first appearance in a Ripley’s cartoon! That’s right, as a kid, Charles Schulz looked up to famed illustrator Robert Ripley and sent him a drawing of his own, only for it to be featured in Ripley’s cartoon in 1937!

Schulz likely didn’t realize the cultural impact Snoopy would eventually have and how could he? Inspired by Robert Ripley as a young boy, Schulz would go on to illustrate some of the most prolific cartoons in history!

But that’s not all, both Ripley and Schulz are from Santa Rosa, California, which really goes to show that Santa Rosa is built different when it comes to fostering iconic artists. Let’s dig deeper into the history of Charles Schulz and learn more about the man who has left a major mark in the world of illustration and comics!

A Star is Born

Charles Monroe “Sparky” Schulz once described his life as being “one of rejection.” This sentiment is at odds with the way he’s thought of today. By the time he died on February 12, 2000, he was one of the most celebrated cartoonists of all time.

Schulz may have said that about his life because for some time it, and even the Peanuts comics, wasn’t always one of success. Schulz was born on November 26, 1922, so we’re looking back at a career following what would have been his 100th year!

One of the most beloved characters Schulz ever drew was Charlie Brown’s loyal canine companion, Snoopy. Born on the Daisy Hill Puppy Farm, the playful pup appeared sporadically throughout the comics before becoming a major character. But you may be asking, how did the idea for Snoopy come about and what was Ripley’s role in all of this?

Schulz, nicknamed Sparky as a kid, was inseparable from his own black-and-white dog, Spike. There’s even a book about the pair by author Barbara Lowell. Spike was something of a character; he could ring the doorbell of the family home, understood more than 50 words, and ate the most shocking things without getting sick.

Enamored with his pup and his abilities, 14-year-old Schulz drew a picture of Spike, which Schulz submitted to Ripley’s Believe It or Not! The drawing of Schulz’s dog was described as “a hunting dog who eats pins, tacks and razor blades.”

Ripley featured the artwork and story in the February 22, 1937, panel. It was Schulz’s first professional publication, and the sketch of the cute little dog would later serve as inspiration for “Snoopy” in the comic strip Peanuts. 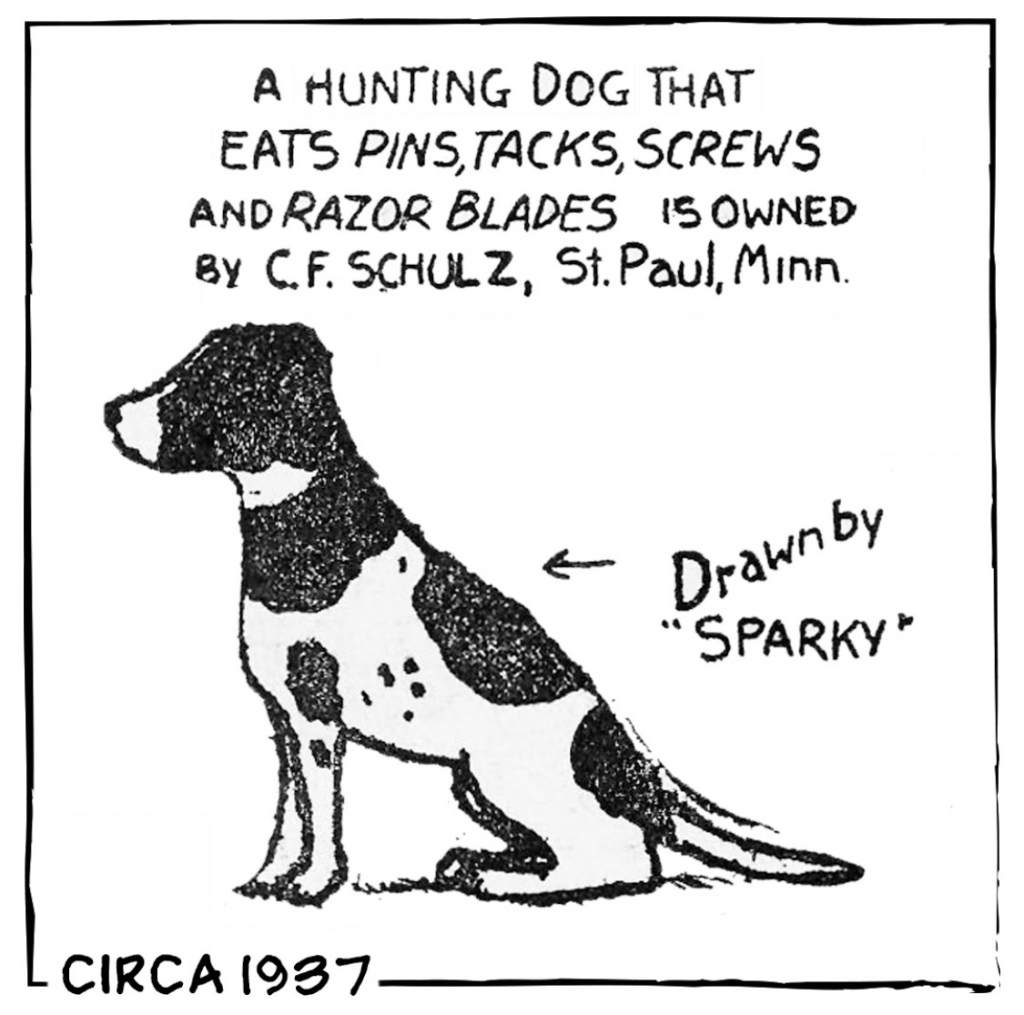 It would be years before Schulz successfully published again. You may be surprised to know a number of publications turned down a comic strip featuring Charlie Brown. Before it was called Peanuts, Schulz submitted his comic called “Li’l Folks” to a variety of papers and was continuously rejected. The name was changed when it was accepted in 1950 by United Feature Syndicate, and Schulz began to build the world of Peanuts.

Originally, the comic didn’t seem to be that different from other four-panel strips at the time. The difference was that Schulz managed to create characters that deeply connected with people of all ages.

There’s Charlie Brown, who is loyal, determined, and a bit insecure. He deals with a lot of failures, but he always gets back up to try again. Snoopy is a faithful dog with a vibrant imagination. Lucy is a bit bossy and controlling, but she’s also a problem-solver. The list goes on to include characters like Sally Brown, Linus, Peppermint Patty, and Schroeder.

Schulz listened to his fans and what they wanted, and he continued to add more characters. Originally worried he wouldn’t be able to do justice to a Black character, he avoided adding one for some time. However, following the assassination of Martin Luther King Jr., a Black schoolteacher named Harriet Glickman wrote a letter to Schulz, encouraging him to add more diversity to his comics. After a few letters back and forth, Franklin Armstrong debuted in the comics on July 31, 1968.

Named after Peanuts’ Franklin and cartoonist Robb Armstrong, Peanuts has launched The Armstrong Project to foster opportunities for students at Historically Black Colleges and Universities, starting with endowments at Howard University and Hampton University!

The official website describes Franklin as a “busy kid: he plays baseball and is learning guitar, he’s a member of a swim club and of 4H. Though his life is active, Franklin is never too busy to help his friends. He is supportive and smart and always willing to lend a hand. He also enjoys spending time with his grandparents and learning about the old days from them. And even though he thinks Charlie Brown’s friends are a little weird, he’s happy to be part of the gang.”

What’s Next for the World of Peanuts

The comic was so successful that it spurred TV shows, movies, and every imaginable kind of merchandise. The holiday specials are one of the most popular seasonal programs on TV and watching the Halloween and Christmas specials are a tradition for a lot of people. Believe It or Not!, the Peanuts cartoons generate about $2 billion per year in retail sales worldwide, according to NBC Connecticut.

Loyal fans needn’t worry, though, because no new comics will be made without Schulz. The artist died on February 12, 2000, and his comic announcing his retirement ran the next day — it was the last new one to ever run. Though there are plans to still create new specials and merchandise, everything is based on previous comics.

November 26, 2022, would have been the cartoonist’s 100th birthday, and since there won’t be any new comics, it’s great that we have so many to look back on and enjoy. We here at Ripley’s feel honored to be a small part of the story!

Source: Snoopy First Appeared in a Ripley’s Believe It or Not! Cartoon