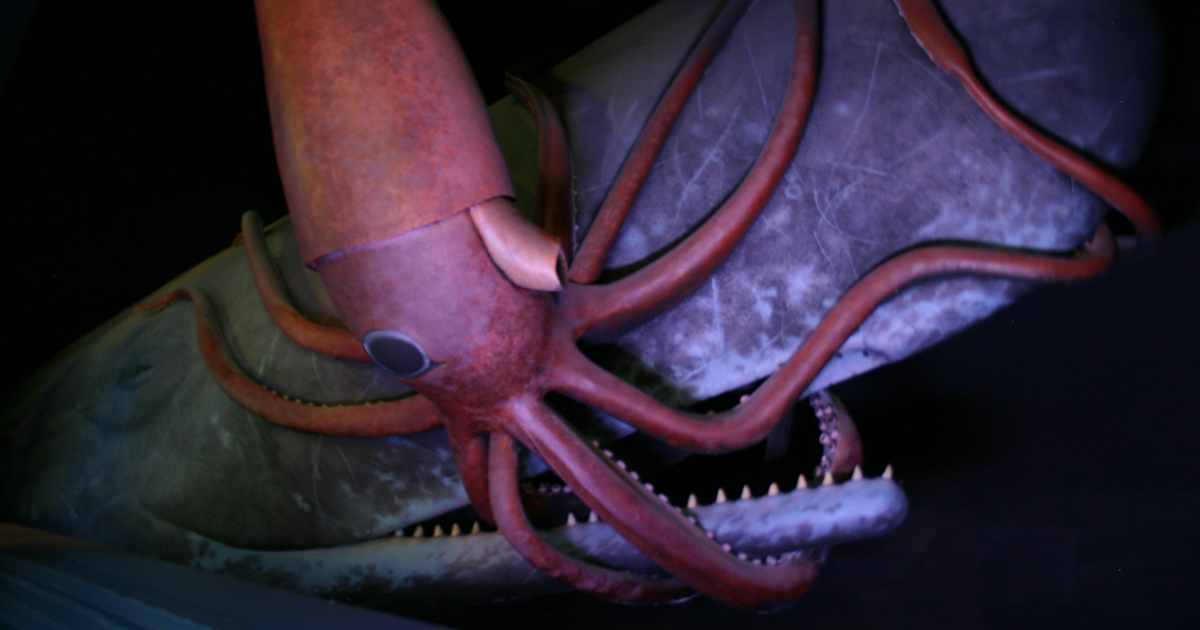 One of the most iconic lines from 1981’s Clash of the Titans remains, “Release the Kraken!” While the Hollywood version of the Kraken was an anthropomorphized, princess-eating monster, the real-life animal is alive and well in deep waters around the world.

Known as the giant squid, these fantastic and elusive creatures are a sight rarely beheld by human eyes. Yet, they populate the world’s oceans by the millions… some even say hundreds of millions.

Here’s the wild story of one gigantic cephalopod that recently washed ashore in New Zealand.

The sheer vastness of the ocean and the extreme depths at which giant squid typically reside make it difficult to determine just how many of these creatures are out there. Scientists must use indirect methods to even guess at what the giant squid population might be.

Based on the content of sperm whale stomachs, researchers Clyde Roper and Liz Shea estimate between 4.3 million and 131 million giant squids are eaten per year. The larger number comes with startling implications—it would mean sperm whales consume 3.6 million giant squids every single day. That’s 40 per second, Believe It or Not!

And that’s not counting how many millions of giant squids are out there not being eaten!

While the planet’s oceans potentially contain hundreds of millions of giant squids, the chances of catching sight of one remain astronomical. That’s why visitors to Farewell Spit felt so amazed when they spied a half-eaten squid body on the nature reserve beach in northern South Island. The corpse was initially found semi-buried in the sand by a reserve guide. After sending out an alert, a nearby tour group rushed over for a look-see.

The visitors reported feeling shocked by the sight of the big squid, measuring 13 feet long at the mantle. They snapped photos of the deep-sea beast remarking on its half-eaten tentacles. (The entire length of the sea critter is unknown because what remained of the tentacles lay buried beneath the sand.)

Anton Donaldson, the group’s guide, stated, “It’s not a common find on any beach, so if you’re able to be there at the right time, it’s a once-in-a-lifetime opportunity.” He also expressed a sense of tragic wonder at observing a “magnificent example of a large sea creature” that had perished.

Apart from these occasional sightings, most giant squids hide among the clandestine millions in the so-called Twilight Zone of the ocean. The Twilight Zone exists at depths of 1,000 to 2,000 feet. (For context, deep-sea diving begins at roughly 60 feet.)

A few locations in the world get regularly graced by the bodies of giant squids. These include New Zealand and South Africa. For example, in 2019, another portion of the beach at Farewell Spit became host to a giant squid body measuring 18 feet long.

As for South Africa, it’s also seen its fair share of beastly bodies. In April 2022, a nearly 12-foot-long squid washed up on a beach near Kommetjie. Moreover, a 14-foot-long squid showed up on the coastline near Cape Town in August 2022. These finds attest to the real-life fights that occur daily between two colossuses of the deep: sperm whales and giant squids.

What we know about giant squids is limited almost exclusively to what’s washed up in these coastal regions over the decades. Plenty of unanswered questions remain. Scientists don’t even know for sure what the animal’s range is. That said, massive cephalopod remains have been found in every ocean on the planet.

Researchers still debate how many species of giant squid exist. Some believe there may be as many as eight. While this sounds mindboggling, that’s a tiny sliver of the hypothesized 500 different species of squid thought to lurk in the world’s marine environments, ranging in size from one inch to a school-bus-sized 45 feet.

That said, the largest giant squid on record came in at a whopping 59 feet long and weighed one ton. That’s something any ancient Greek princess should fear!