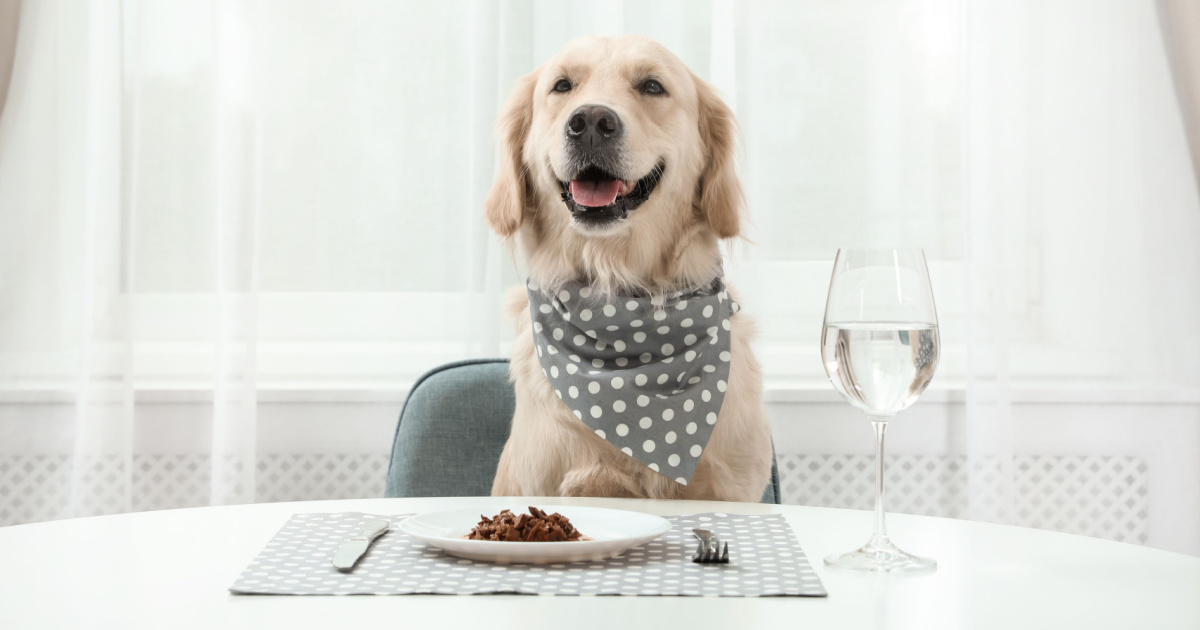 Most dog lovers feel elated when they stumble across a restaurant that allows more than service animals through their door. And if an occasional bowl of water or food is thrown into the mix, all the better. Establishments that go all-out in the name of man’s best friend offer canine-exclusive menus, so your pups can dine with you. Sadly, these are often few and far between.

But nothing compares to what one Bay Area restaurant tempts four-legged friends with. Dogue (pronounced like “vogue”) recently debuted in San Francisco’s ritzy Mission District, offering the kind of posh fare you’d expect from the Michelin star–studded neighborhood. As for gourmet dog food, it shares something with its human equivalent: a lofty price tag. Pooches can experience foodie bliss at Dogue starting at $75 apiece for the tasting menu.

Here’s everything you need to know about the restaurant that’s singlehandedly defining canine fine dining.

In recent years, there’s been a revolution in the pet food industry when it comes to canine chow. More pet owners than ever before have jumped on the wagon to feed their beloved pets raw or freshly cooked cuisine. The number of brands offering human-grade food for furry friends has exploded, with companies like The Farmer’s Dog, Ollie, and Nom Nom becoming household names.

Within this environment, Dogue’s premise doesn’t sound so far-fetched. If people are willing to pay more to have the highest quality food delivered to their doorstep, why wouldn’t they stop in for a bite while in the City by the Bay?

Tasting menus include between five and seven courses, including a starter course of mimosas for the humans. This formula for success appears to be working because Dogue has seen plenty of pampered puppy patrons since its recent opening.

Dogue, which rhymes with Vogue, offers a $75 multi-course tasting menu for dogs. The restaurant in San Francisco is believed to be the first fine dining tasting menu restaurant exclusively for dogs. pic.twitter.com/Snfnna36wI

Fur-Friendly Dining in the Heart of the City

The canine-centric restaurant is the brainchild of dog lover and classically trained chef Rahmi Massarweh. And it features everything fur babies could ever drool over… and then some. Owners of lucky pooches pay top dollar for chicken skin waffles, steak tartare, wild antelope heart bites, and more. In other words, there’s no eating old slippers, dust balls, or grass at this joint!

Why has Massarweh allowed his culinary skills to go to the dogs? The new venture has not only permitted him to eschew the human cooking world’s rat race, but it also allows him to serve some of the most appreciative clientele in the biz. That said, he also laments their tendency to scarf down meals: “Our pastries, for example, take about two days on average to make. I know they’re going to be eaten in two seconds.”

Despite the rough handling of his cuisine by canine guests, Massarweh appreciates their enthusiasm. And he considers his entrepreneurial endeavors a job well done if they bring awareness to the need for real, fresh food for dogs. But he also derives immense pleasure from the way clientele relish his gastronomic offerings.

He notes, “It’s rare when as a chef, I walk into the dining room to touch tables and every single guest has a smile on their face.” If wagging tongues, drooling mouths, and hypersonic feeding speeds bear any correlation to smiles, Massarweh is top dog of the still-emerging fauna foodie scene.