Does The Simpsons Really Predict the Future?

The Simpsons, with its impressive three-decade history, is one of the most successful and enduring sitcoms ever. The longest-running primetime scripted series period, in fact. That’s remarkable in and of itself, but how about its uncanny ability to predict the future?

There have been a staggering 30 seasons and over 650 episodes of The Simpsons. As a general rule, the show is mostly concerned with events that take place within the fictional bubble of Springfield, but it does venture into the real world on occasion (or, at least, a Simpsons-fied take on it). When it does, things tend to get super spooky.

How many of the real-world events depicted in The Simpsons have actually come to pass? Too darn many. The best-known example would have to be the seventeenth episode of season eleven, “Bart to the Future,” which shows Donald Trump as the President of the United States. The episode was first aired in March 2000, seventeen years before this actually came to pass.

The way some fans tell it, The Simpsons saw a whole array of things coming. The 2014 Ebola outbreak, for instance, was supposedly referenced in 1997 episode “Lisa’s Sax,” in which Marge gives Bart a book titled Curious George and the Ebola Virus to read.

Or how about the fact that some claim that London icon The Shard (which started to be built in 2009) can be clearly seen in the episode “Lisa’s Wedding,” during a segment set in the English capital? A skyscraper seen in the background looks oddly like The Shard, and is even in (give or take) the right location in the city!

Elsewhere, The Simpsons has been credited with correctly predicting the outcome of several Super Bowls. In Season Three’s “Lisa The Greek,” Lisa announced that the Washington Redskins would win, and so they did.

“The next year,” The Hollywood Reporter states, “the staff decided to dub in the names of that year’s competing teams, and they were once again correct with their call of the Dallas Cowboys as victors. The redubbings continued with moderate success over the next few years, finishing with another accurate prediction of the San Francisco 49ers over the San Diego Chargers in Super Bowl XXIX.”

Much later, in Season 25’s “You Don’t Have To Live Like A Referee,” Homer becomes a soccer referee after rife corruption leaves FIFA without any better candidates. In typical ridiculous Homer Simpson fashion, he finds himself in charge of the big game, the World Cup final, and Germany goes on to win. Germany did indeed win the World Cup for real that year, but not only that: a big FIFA scandal emerged in 2015, echoing the show again! 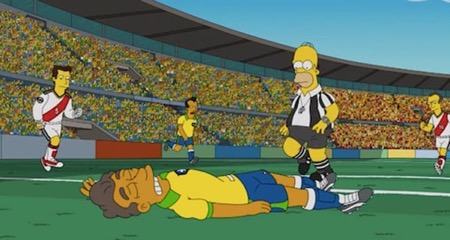 There are countless examples of events and incidents in The Simpsons having strange parallels, but is the show really predicting the future? What’s actually happening here?

In 2018, The New York Times released a report entitled ‘The Simpsons’ Has Predicted A Lot. Most Of It Can Be Explained.’ It highlights the odd predictions –or coincidences—that have come out of the show over the course of its record run. These have included “the Trump presidency, the discovery of the Higgs boson particle, 9/11 and, most recently, Disney’s takeover of Fox.” There’s something uncanny about these things, there’s no denying, but there are rational explanations too.

For one thing, as long-term viewers will know, The Simpsons has a way of weaving lowbrow and highbrow humor together. One minute, there’ll be a witty-yet-subtle literary reference, and the next, Homer will fall over in melodramatic and hilarious slapstick fashion.

The conclusion many have reached, then, is that “The show is the product of brilliant minds, many Harvard educated… The result is a show packed with references to art, literature, pop culture, politics, and science.” The natural result of this, writes William Irwin in The Simpsons and Philosophy, is that “When that many smart people produce a television show, it’s bound to make some startling ‘predictions.’”

The other thing to bear in mind is just how darn long the show has been going, and how much of a reputation it has for its predictions in the first place. Combine these two factors, and you’re bound to hit on examples of the future being “predicted,” and a huge fuss being made of them when they are.

Persi Diaconis and Frederick Mosteller, in their paper Methods for Studying Coincidences, write of The Law of Truly Large Numbers. It states, they explain, that “with a large enough sample, any outrageous thing is likely to happen. The point is that truly rare events, say events that occur only once in a million, are bound to be plentiful in a population of 250 million people.”

In the case of the show, then, this makes perfect sense. After so many episodes and so many references to that Simpsons-fied “real world,” they’re bound to hit on some events that actually do turn out to be real. Educated guesses, in short, and Harvard-educated guesses at that.

As well as this, the Law of Truly Large Numbers could also be referring to that one fan in a million who notices a building that looks a whole lot like The Shard, and starts a little hysteria but insisting that that’s what it is.

When all’s said and done, Bill Irwin is right on the money when he concludes, “Many jokes reach just beyond what is real, and that is a pretty good way of setting yourself up for things that may turn out to be real in the future.” They may have turned out to be real on many occasions, but did the writers of The Simpsons truly know that they would? Clever as they are, that’s a little beyond them.

Source: Does The Simpsons Really Predict the Future?