Aside from when they were first released in 1999, collecting Pokemon cards has never been so popular.

Sure, the Pokemon Go craze of 2015 reignited that spark for many, but it wasn’t until the world plunged into lockdown in 2020, the masses returned to the hobby.

Bringing with it a wave of celebrity endorsements (such as Gary Vaynerchuk and Logan Paul), the value of Pokemon cards continues to skyrocket.

So the question is, how do you start collecting Pokemon cards?

Well, firstly, we need to look at your reason for collecting.

Why do People Collect Pokemon Cards?

This is often broken down into two categories:

1. Those who collect for happiness and nostalgia

2. And those who collect, then sell, to turn a profit

But of course, these two schools of thought can work together. Many people sell cards, to fund the purchase of others.

It’s important though to identify your reasoning, because it will dictate where and how you’re going to start. 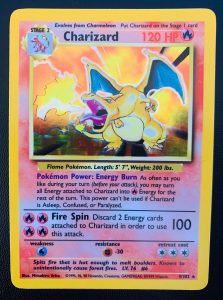 This is the hobby in its purest form.

For many of us that experienced the original Pokemon card craze, there are such fond memories.

From the excitement of opening a fresh booster pack, to the thrill of pulling a holographic Charizard. No other toy or activity came close at the time.

Of course, we’d all like to go back and delicately preserve the cards that are now worth thousands, but back then trades, battles, and 50 cards in your pocket was the fun of it!

Fast-forward twenty years, and we have a wonderful opportunity to relive our childhood again.

There is no right or wrong way to start collecting Pokemon cards again if you’re doing it for happiness and nostalgia.

Collect the cards that put a smile on your face!

This could be complete sets, different cards from the same Pokemon, only holographics, perhaps even cards in different languages. 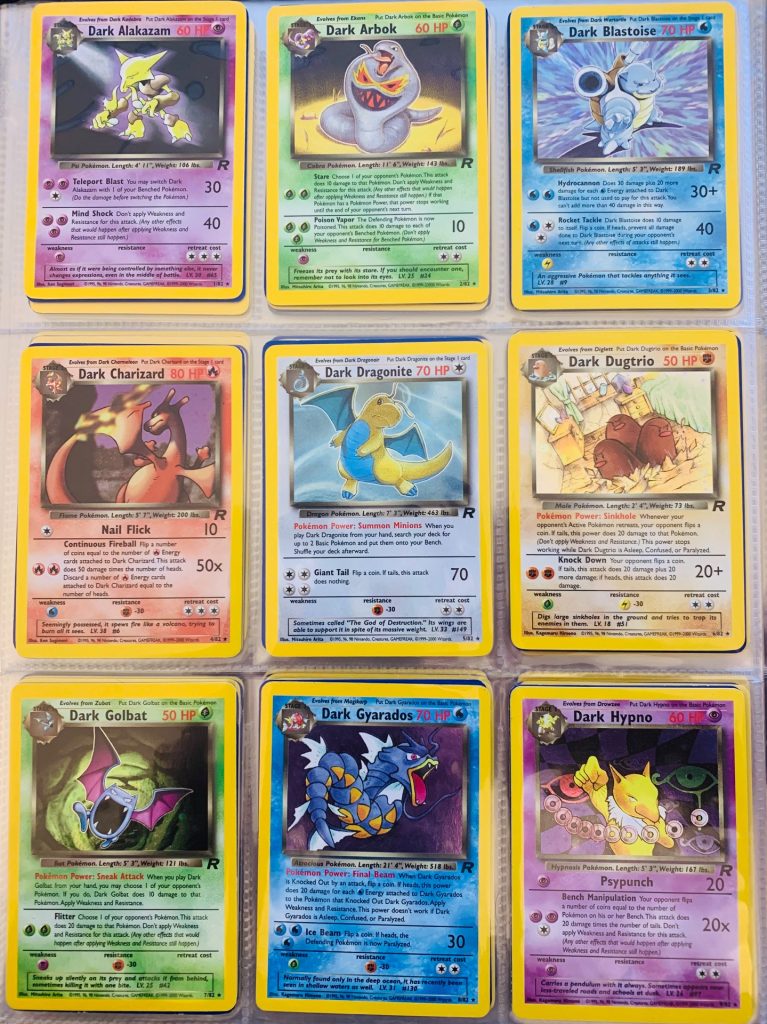 For me personally, as a kid the only set I ever completed in its entirety was the 2000 Team Rocket Set.

So, it was of great satisfaction to me when I rebuilt my binder 20 years later.

I didn’t care about graded cards or values, I simply just wanted to flip through the pages and see that complete set again.

Tip: There’s a very handy resource called Pokellector, which shows you the full list of cards for each set. You can even log which ones you have, and which you still need to collect.

I then went on eBay and found listings of the individual cards I wanted.

I decided I wanted a minimum card condition of Near Mint, but for your collection this is up to you, and then I simply purchased the cards I was happy with.

And I’ll tell you, opening up those parcels and seeing that old-school epic artwork again, was the closest thing to a time-machine I’ve ever experienced!

With prices in the hobby so high, there’s no denying it… there’s money to be made.

Especially at a time, where many people have lost their jobs, learning to buy and sell Pokemon cards online is a legitimate way to make some extra cash online.

So how do you acquire Pokemon cards, to then flip and turn a profit?

There are three basic ways to do this: 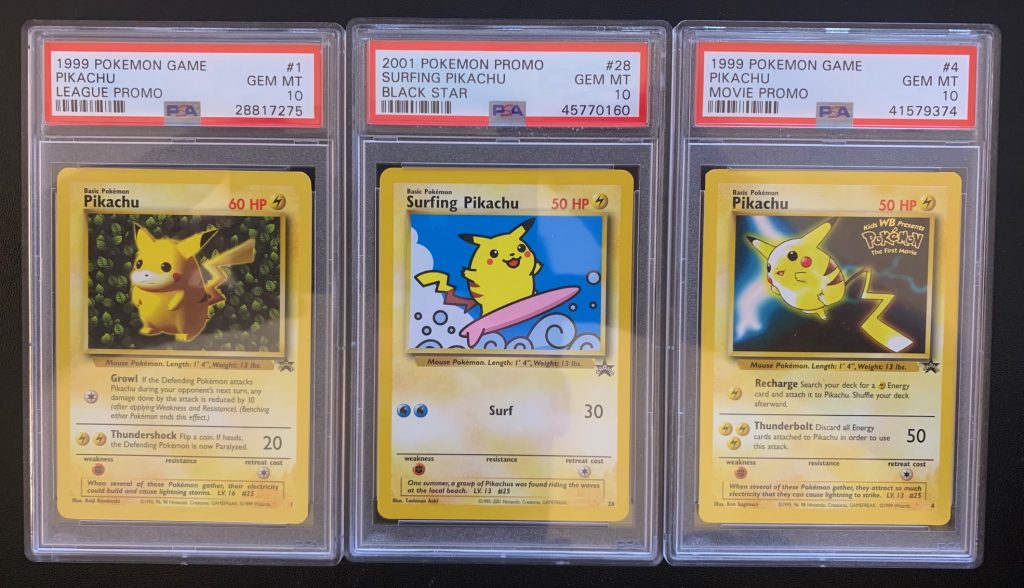 Like anything in business, if you add value, there’s potential to turn a profit. The same goes with Pokemon Cards.

Grading Pokemon cards is the process of rating their condition and encapsulating them in a case. The better the grade, the higher its value.

If you can spot an opportunity to purchase a vintage card in good condition and get it graded, then there’s the potential to make money.

A few caveats though:

You must educate yourself first on how cards are graded.

The two big players in the Pokemon grading market are PSA and Beckett.

This is how PSA decides upon grades: https://www.psacard.com/resources/gradingstandards

This is how Beckett does it: https://www.beckett.com/news/walking-bgs-process/

You can then try to assess what the card you’re looking to buy might get.

Tip: If buying from eBay, always ask for more images if their photos don’t clearly show the card:

Once you’ve judged the condition yourself, then visit Pokemon Price. You can drill down into each individual set and see the purchase history on eBay for graded cards.

This step is vital to understand what your potential profit margin might be.

This example aims to highlight exactly why being able to judge card condition yourself is so important. There’s no shortcut here, it comes with experience.

Another caveat to be aware of is the time it takes to get cards graded.

Because of the massive increase in demand for grading services, at the time of writing, there is a huge backlog. This means, it means it might take months for you to receive your cards back.

Therefore, grading cards for profit has to be seen as a long-term strategy.

If you don’t like the idea of waiting, you could simply try flipping graded cards.

As the value of Pokemon cards continues to surge, it’s likely that what you buy today will be worth more tomorrow.

Of course, you need an eye for spotting a good deal, but there are plenty of opportunities on eBay to buy graded cards, and simply relist them at a 10-20% premium.

From a purist’s perspective, it’s a bit of a soulless strategy.

But from a profit perspective, you’ve got to respect the hustle!

Lastly, you could always gamble on pulling hyper rare cards from modern sets.

With multiple sets being released each year, how do you make sure Pokemon cards stay valuable?

You make the top cards harder to find of course!

It’s of course a gamble, but If you want the thrill of opening loads of packs, combined with the potential for a big payday, modern cards are the way to go. 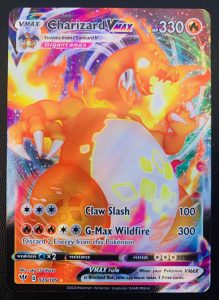 What Are The Best Pokemon Cards to Collect?

As I mentioned earlier, a lot of people collect for both the nostalgia, and the financial side of things.

Being able to enjoy your cards and sell the odd one to fund future purchases is a great position to be in!

So, as a beginner, what are the best Pokemon cards to collect?

This is the set that people grew up with, and that has the nostalgic association for most generation Y collectors.

In fact, any of the following original Wizards of the Coasts sets make a great starting point: 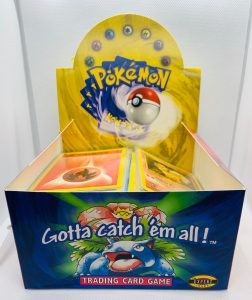 Are Newer Pokemon Cards Worth Collecting?

Hyper rare cards in the newer sets, drive the value. This in turn keeps collectors wanting them.

If you’re collecting Pokemon cards for financial gain, then only the rarest cards will help you achieve that.

Remember the value will always be driven by scarcity and demand.

If it’s more about enjoyment for you, then it’s entirely a personal preference.

Some people love the new generation of Pokemon, the Full Art cards and the holographic variants. Some prefer it old school! Collect what you enjoy, I say. 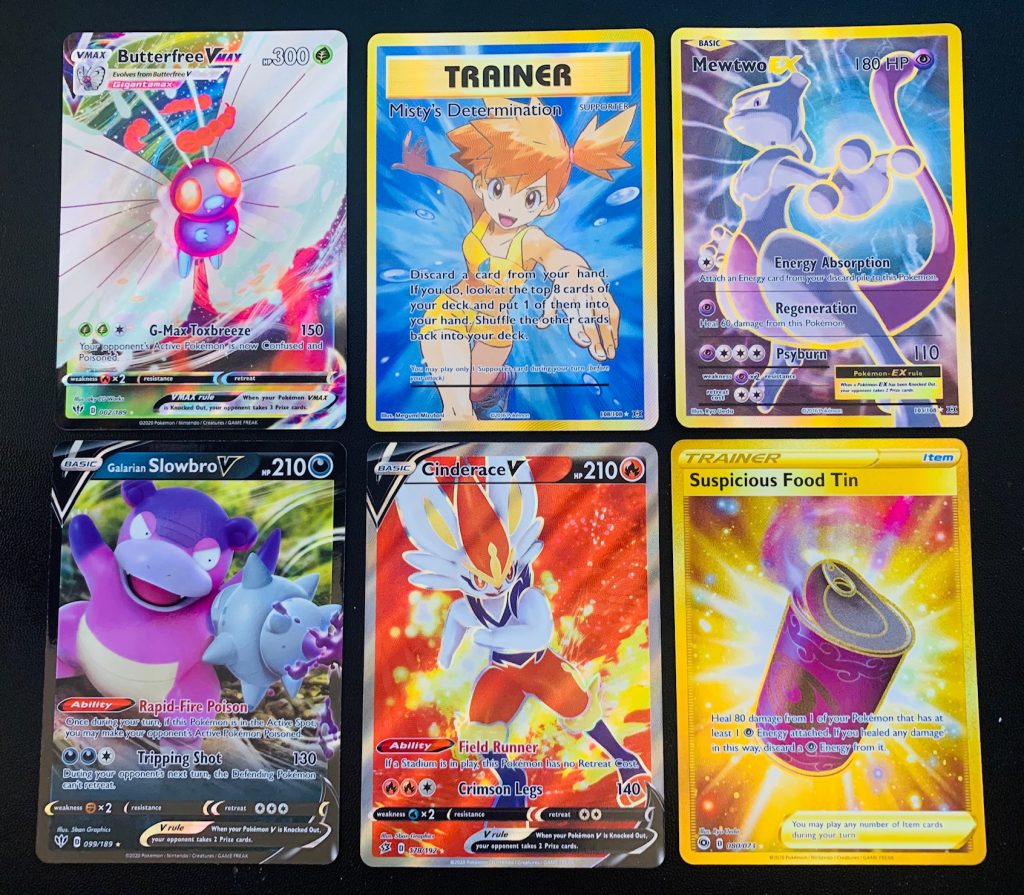 Is it Too Late to Start Collecting Pokemon Cards?

There is always an entry point, even with vintage Pokemon cards.

Ultimately, your budget will determine where yours is, and what type of cards you decide to collect:

A common ungraded card in poor condition might cost less than a quid – a 1st Edition PSA 10 card can cost tens of thousands of pounds!

You have to decide where to position yourself as a collector.